Callaway staffer Gary Woodland added to what’s essentially been a four-month hot streak after playing brilliant golf and reaching a sudden death playoff at the CIMB Classic. Still in his first calendar year as a Callaway Staff Pro, Woodland delivered throughout a long week of rain delays, an elite field and ultimately a Monday morning finish.

Long drives were a given, yet the strength of his solo second place finish came from his ball-striking, he hit over 77% of greens for the week, and a hot putter. Woodland relied on a HEX Chrome+ Golf Ball, RAZR X Muscleback Irons, a RAZR Fit Xtreme 4-wood (16.5°) and an his Odyssey Versa #1 Wide Black gamer.

The runner-up finish continues a tremendous run that started with his convincing win in August at the Reno-Tahoe Open. His credentials since then include a T2 at The Barclays, a stellar performance in the 2013 FedExCup Playoffs, and now he’s already up to the 5th in the 2013-2014 FedExCup standings.

The Callaway Zoo Crew told us that he was on his game a few weeks back at our 2014 Commercial Shoot in Las Vegas, and that they expected a performance like this right away. One thing’s for sure, that limited offseason certainly didn’t  slow him down! He should be in for another big year!

Thongchai Jaidee and Thomas Bjorn always seem to make their way onto the first page of European Tour leaderboards, and last weekend at the BMW Masters was no exception.

And just for fun, top-10 regular Pablo Larrazabal threw his name in the ring as well. With Jaidee (T2), Bjorn (T5) and Larrazabal (T5) all in the mix, Callaway was around the lead in Shanghai.

Jaidee played a 440cc FT Optiforce Driver (9.5°), FT Optiforce 3-wood, a HEX Chrome+ Ball, X Forged Irons and a Versa #7 Black Putter to post his seventh top-10 and third top-3 of the year. He’s now all the way up to sixth in the European Tour’s Race to Dubai standings, joining fellow Callaway staffers Bjorn, Branden Grace and Ernie Els in the top-15.

Bjorn is up to eighth place in the standings after posting his eighth top-10 on the year last weekend. He’s currently got an X Hot 3-wood, HEX Black Tour Ball and an Odyssey Tank #7 Putter in his bag. Meanwhile, Larrazabal played a 440cc FT Optiforce Driver, FT Optiforce 3-wood and a Versa Putter in HIS eighth top-10 of the year. Keep up the strong play, fellas!

Monty Contends On The Champions Tour

Callaway staffer Colin Montgomerie made a run at the win on Sunday and went on to post a T3 finish at the AT&T Championship. He hit over 83% of fairways, 72% of greens and ranked fourth in putts per GIR during his best finish of the season. Great work, Monty! 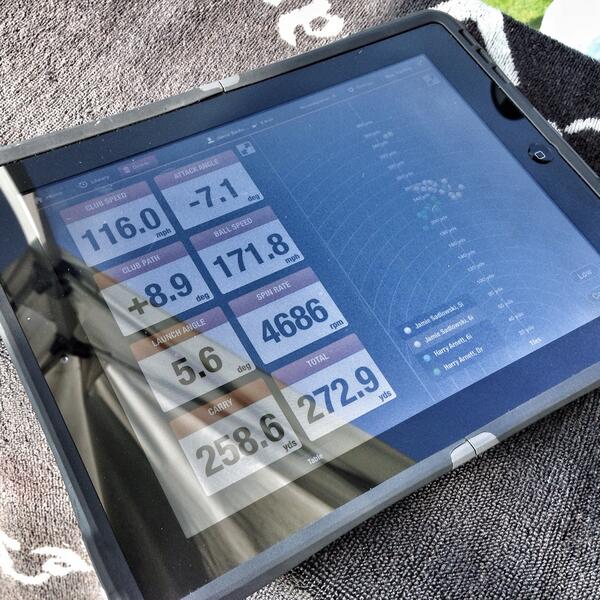 He put in some hard work with our Fitting Team, and for a little Friday fun we had a  “long drive contest” of our own – Jamie Sadlowski’s longest 6-iron vs. Harry Arnett’s longest drive.

Our SVP of Marketing is a capable player but after Jamie ripped his first ball 272.9 yards with an Apex 6-iron (seriously), Harry had some work to do. Jamie’s 6-iron held on for the longest ball, and gave him just a little extra confidence (like he really needed it) before heading out to Las Vegas for the finals.

For more on the X Hot Long Drive Team, please visit our LDA team page. Have a great week, everyone!